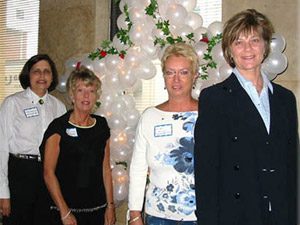 These women were meant to be together, in that they had many similarities. None of them knew each other prior to their tragedies. Barb and Vicki each lost a “Brandon” and had one remaining child, a daughter and they were both named Kimberly. They all lost their “baby” (the youngest child), they all had two children; one boy, one girl. Jan and Barb lost their children three months apart – Linda and Vicki lost their sons three months apart.

They first came together and met in October of 1996 as a source of support for one another. As time went on and they all got to know one another better, they discussed the possibility of creating a pin that they could wear that would signal to people at a glance that they are grieving parents. For the next two and a half years they met every three to four weeks to plan this organization. They designed the star pin and had a freelance artist make them each one. From there they went to a jeweler who had made a mold and is now producing orders.

Nothing in life prepares a person for the death of their child – NOTHING! We can’t take away the pain of the loss, but we can offer some help.

The mission of the One Bright Star organization is to be a resource for grieving families who have lost a child to death and has created a star symbol to recognize and support families.

As parents who had lost a child, the central interests of the founders as they launched the important work of One Bright Star were, and remain:

Alone in the dark
I stare into the blackness.
This is the truth;
No promises, no wishes, no dreams
Can ever bring you back.

In the depths of this darkness
God guides me to the light,
Twinkling, growing stronger, restoring my sight.
Far from my touch,
But close within my heart
I see you, my child,
Forever my bright shining star.

– written by the founders

The shining star is not only a symbol of your lost child, but, with God’s help, may you feel the strength to carry on, to cherish yesterday, live for today, and hope for tomorrow.

A vision of the founders of One Bright Star is that people will recognize the symbol and will reach out to those who have suffered such a loss with greater compassion, and with hugs and support.